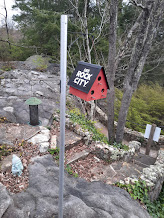 This weekend, the boys and I decided to live like tourists in our area and experience one of the local attractions close to us. So we chose Rock City. The entire day before the trip and the day of I talked it up about how much fun we would have and how cool Rock City is (even though I hadn’t actually been in ages). But anyway, I guess I got them so excited that we stayed up until midnight Friday night and then woke up before the sunshine on Saturday ready to go. Unfortunately, our ticket time was not until 1:30 so we would have to stall for a bit.
Do you ever have those mornings where in the first five minutes of being around your kids you can already tell what kind of day you’re going to have? Well, this morning they woke up with some siracha spiced attitudes and wanted to act all WWE smackdown style towards each other. In a short ten-minute span we had at least fifteen time-outs for aggressive behaviors. This was of course followed by sassy-mouthed comments and total meltdowns. In those exact moments, I knew that this entire day was going to be “FUN”.
I endured another hour or two of absolute chaos from the kids before we just HAD to have a brief nap time intervention at 11 a.m. This never ever happens on the weekends, but today it was a NECESSITY. So there was more screaming and crying and “mama I need to pee” or “mama I’m thirsty” for at least forty-five minutes before at last….silence.
The littles slept for a good hour while I took advantage of this time to get myself showered and ready for our big adventure. I drank an extra cup of coffee and “shooed” away all the bad mojo in my mood to make sure we had a clean, fresh slate after nap time.
Fast forward to the terrifying drive up the mountain to Rock City itself. Super nerve-wracking. I get this is supposed to be an authentic, nature experience, BUT a little wider roads would not ever hurt anyone.
The place was crowded, as expected for Spring Break season, but we managed to get ourselves checked in just in time to start the journey through the ever-popular Rock City.
Now, I’m not sure what the boys were expecting from Rock City exactly, but they got their little “treasure maps” and took off like a couple rockets through these narrow, rocky paths. Now these paths, I learned, are only one-way paths. So there’s no turning back. Once you start journeying, you’re stuck going forward until the next break where you can then decide to take a “shortcut” exit or continue the suggested trail for ultimate views. Not only are these one-way paths, but they are super narrow and very high up. 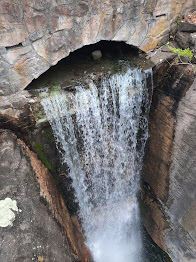 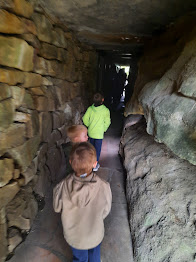 …Now, this mama is TERRIFIED of heights, but I was willing to endure a few high spots for the enjoyment of the kids. But these fools obviously don’t care about near-death experiences because they galivanted through the tight, people-filled walkways without thought of the potentially steep fall if one of them tripped. At every opening, there was a little spot to look out all the scenery. I, of course, was not a fan of these because my natural instinct is to look down and see how far my death is if I fall, which of course causes instant panic that one of these non-caring boys is going to slip and fall and it’ll all be over then. But spoiler alert yal, no one died that day! So good news there. We make it about a quarter of a mile into our journey before the complaints begin. “I’m hungry,” “My thirsty.” “Where’re the games at?”
So we stop and take a short intermission for fruit snacks and water before we continue on again. 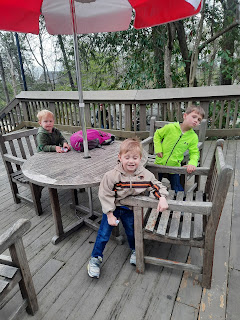 Feeling slightly better after a brief snack we decide to continue. We now have three different options to choose from: The short path of Fairyland Gardens/exit, Swing-along Bridge, or Stone Bridge. Obviously, if you saw this Swinging Bridge you would understand that just looking at it made my stomach sink to my knees as I imagined every possible death scenario that was bound to happen if we went across the bridge that a million other people had successfully been over already. Even as I write this and think back about that bridge, I still get that lump of anxiety in my chest over it. 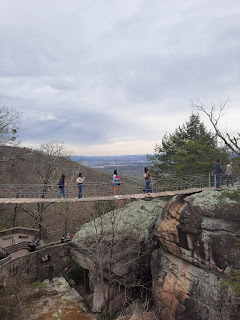 So we of course did not take that option. Instead, against the wishes of my danger-loving six-year-old, we took the stone bridge. 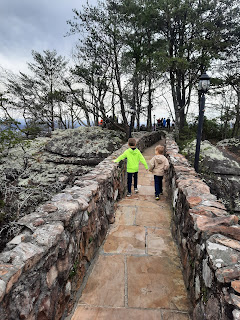 Which was, as you can tell, just as high up and terrifying for me. Once over the bridge, it just gets scarier for me. As we are at the “VIEW” point now where you get to look out and see seven states and lots of other things. This was NOT my cup of tea. While the view was beautiful and all, all I could do was try not to die as the boys ran excitedly from one end of the ledge to the next trying to see over the cliffs. Talk about heart attack. At this moment, I am absolutely regretting the fun mom decision to bring them here. These memories, while great for them, are not playing out in my head as I expected (as usual).

I finally convince them it was time to move on from this terrifying area by using the favorite word “ice cream”. this drags them away from the terrifying views long enough to move on to a safer space. By now they are getting bored with the site seeing though and want to play. I know better than to stop and play because then we will never get out of this place and quite frankly, my stomach is starting to rumble (probably shouldn’t have skipped out on those lunch plans). But as usual, the boys win the argument and we stop yet again for a little playtime. 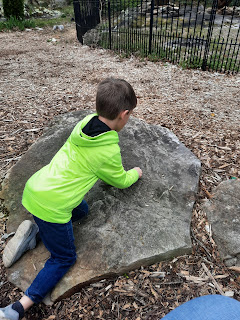 Mac has found a cool little rock that draws like chalk on the bigger rocks. This was so interesting to him that he could use rocks to write. He wanted to sit and do this for hours, but the weather had other plans and the gray clouds began to move in. I informed the boys it was time to finish our little adventure up. This time, trying to move along was not nearly as easy. They were getting tired and hungry. I didn’t even have the heart to tell them that it was still a long walk to finish the tour. We instead decided at the next “landmark” to take the shortcut exit, rather than completing the tour through Fat Man’s Squeeze and whatever remained after that. As we journeyed through our little shortcut path (Which ended up being a lot longer than a shortcut should be), we decided to bring back our morning attitudes of constant fighting and bickering. One kid touched the other kid, one kid wouldn’t listen to the other kid, and one kid is walking too loudly. And then the meltdowns began. Hudson was just done, Cooper was hungry and thirsty, Mac was bored, and mom is now is very HANGRY.

We stopped and had a brief “Come to Jesus” meeting before we stomped, pouted, and cried our way back to the car. 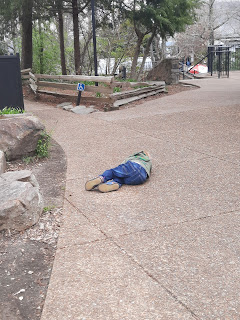 Once back to the car and taking another “woo-sah moment” I was ready to get back into fun adventure mom mode. We puttered down the scary steep mountain, back to downtown where we planned to have ice cream
Downtown is of course packed like it always is this time of year. We whip into a parking lot next to the ice cream store, which clearly reads “parking for store customer only, others will be towed,” but I’m feeling rebellious today so we do it anyway. I mean what’re five minutes gonna hurt at this point?
Into Clumpies Ice Cream Co. we go for another challenge of which flavor we want to choose. For adults, having fifteen different flavors to choose from is the best, but for kids….this is a NIGHTMARE. Do we want strawberry, or chocolate, or tutti-frutti, cotton candy, etc? And we won’t even mention sprinkles and toppings. So Cooper decides on some yummy raspberry sorbet, Hudson picks strawberry, mommy decides on espresso chip, and that leaves Mac. He wants rainbow. There is no rainbow. So now he is at a complete loss for which flavor of ice cream to pick. We spend at least five minutes of him going back and forth examining the flavors like they may change at any second. There’s a line of people (very patiently waiting) behind us as he contemplates this serious life choice. I start to grow impatient because I want to eat my dang ice cream! I count to three and he picks Espresso. Now I know good and well he isn’t gonna like this kind so I tell him to pick something else…Shouldn’t have done that because now we’re deciding again. I finally tell him he has five seconds to pick or he’s doing without. FINALLY, he chooses a blue cotton candy flavor. Of course, he’s unhappy because he gets a cup and not a cone, but I don’t even care at this point. We walk outside to eat our treats and I’m expecting to see a tow truck loading up my mother’s van at this point.
Luckily it’s still there. We find a bench to sit on and immediately Hudson drops his entire cup of ice cream on the ground. The five-second rule is a thing in my life so we dust off the spoon and start to eat it. Mac doesn’t like his flavor (of course not). So he and Cooper decide to feed each other their ice creams. Whatever no one is crying or screaming so I don’t say a word.
We spend a good ten minutes enjoying our ice cream and I decide it’s time to head back to the van that could possibly be towed away any minute (that’s how my luck goes). Once at the van, Hudson decides to spill his ice cream everywhere, and Mac breaks his flimsy little spoon. Who would have ever guessed getting ice cream could be such an experience? 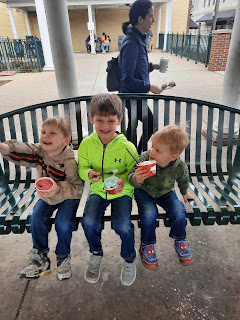 We complete our messy ice cream and load up to run our few grocery and gas errands before heading home.

Seeing Rock City was not the magical experience I had hoped it would be (like most of our adventures these days), but the kids really seemed to enjoy a day out at a new place. I think next time, we will just find a new park to visit rather than climbing trillions of feet high on scary rocks with fearless little boys. 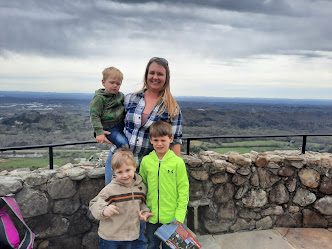 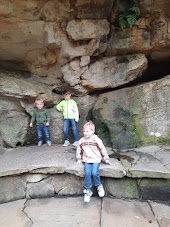 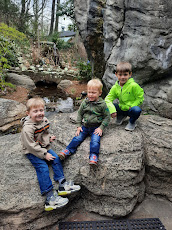 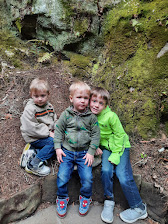